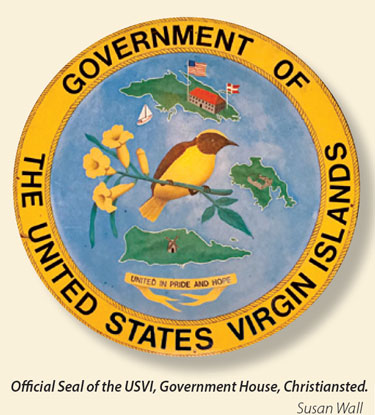 by Nina York
Visitors to the handsome, historic Government House in Christiansted are given a glimpse at the entrance screening area of the official Seal of the United States Virgin Islands. This image encompasses multiple elements of our identity, more so than the Virgin Islands flag, which is a close replica of the United States military image of the American Eagle holding in one of its talons an olive branch, and three arrows in the other, a portrayal symbolizing the national balance between peace and defense. It does not hold any local elements other than the initials V and I, standing for the Virgin Islands.

Our Great Seal, if not of the same artistic merit as the flag, tells much more of a story, much of it of relevance to our Danish visitors. In addition to showing maps of the three main islands of St. Thomas, St. John and St. Croix (albeit not to scale, for practical reasons) each island is marked with little icons that reflect the islands’ past – St. Thomas with the Legislature building, the former military barracks in Danish times, alongside a little Dannebrog, as the Danish flag is called, to indicate that island being the seat of government since 1871. St. John offers a portrayal of the Anneberg ruins, in Danish days a sugar Plantation, today a major tourist attraction. St. Croix carries the image of a sugar mill, of which this island still retains a large number of ruins.
In the center of the Great Seal we view our National Bird, the yellow-breasted bananaquit, to most of us known as the sugarbird. It seems so appropriate that this sweet little sparrow-like critter is very fond of the commodity that in former days brought great wealth to this island, sugar produced from the cane fields that occupied two thirds of St. Croix. Today, many residents hang bowls of sugar outside their home to attract them.

The bird is perched on a twig of our National Flower, the Yellow Elder, also known as Ginger Thomas, with the botanical name of Tecoma stans. This shrub is found growing wild throughout the islands and bring a lovely yellow splash to so many areas of our tropical scenery.

So, in summary, our pride in our nature and history combine in the Great Seal to tell the story to our visitors about us. In addition, it conveys a rare quality found in our people, the recognition and fondness expressed towards Denmark, a former colonial ruler, also demonstrated by the display of the Danish flag at official buildings such as Government House.