A Unique Danish Concept is Making its Way Here! 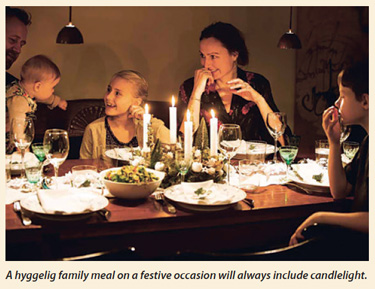 by Nina York
A recent announcement that a Danish word has made its way into the American Webster’s Dictionary is a remarkable feat. In a world where English (normally American English) words are making their way into foreign languages at a supersonic speed, we seldom hear of the opposite for foreign words. The word I am talking about is “hygge” (say “higga”) and describes a concept very essential to all Danes.
Hygge is best described as a feeling of coziness that is found in a friendly get-together in a comfortable environment, often involving the intake of good food and drink and good conversation. It is accepted among Danes as a defining feature of the happiness that is said to be so prevalent among them. “Hyggelig”, meaning cozy (but so much more), is the compliment most often used when showing appreciation of a successful gathering to the host. But it can also be applied to describing a home, a restaurant, even a town or natural environment.
Why is this concept foreign enough to merit special terminology when applied outside of Denmark? Are the Danes such experts at this social skill that it merits a special place in the English language? And what would it take for us in this country to learn such a skill, if it is at all adaptable outside Denmark? Is it confined to an environment of huddling in front of a warming fireplace, wearing woolen sweaters and socks, or can a beach outing also be described as hyggelig? It is my conviction that on this side of the Atlantic we are quite capable of feeling the joy of sharing a happy time with others even in this quite different climate, whether we call the experience hygge or not. We Crucians are known for being rather laid-back, which as I see it fits well within the hygge framework.
This past summer provided an opportunity for many Virgin Islanders to experience Danish hygge as guests in the homes of members of the Danish West Indian Society in Denmark for a Festival on the occasion of the Society celebrating its 100th birthday. It illustrated the concept both in interaction with the hosts and in the numerous get-togethers and excursions arranged, providing happy times for all.
The element of congeniality and mutual acceptance of each other should always be a priority among us all, and maybe our Tourism Department could promote us in Denmark as the hyggelig island; that description would most likely be a successful tool, and frankly not a misnomer. But we can certainly ask Danish visitors to our island how we can make their visit as hyggelig as possible and listen to their response. They all know what we are talking about!