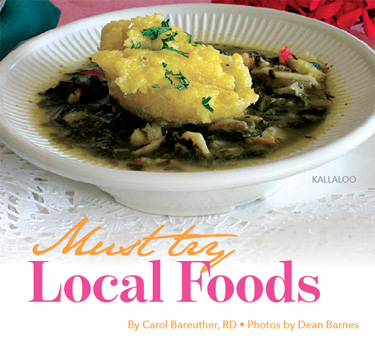 Take the cooking styles of people like the ancient Arawaks, Africans, Europeans, East Indians and Asians. Blend this with a mix of indigenous and imported ingredients, everything from mangoes and scotch bonnet peppers to spiny lobster and bulls feet, and you have the melting pot that is traditional Virgin Islands cuisine.

For great local West Indian food visit St. Thomas’ top local restaurants: Glady’s Cafe in Royal Dane Mall, Cuzzin’s on Back Street and also on Back Street.
Pate: Pates are made from a flaky white flour dough that encloses a hot pepper-spiked mixture of ground beef, conch, salted codfish or vegetables. The dough is wrapped around the filling turnover fashion, and then deep fat fried.

Caribbean lobster: Unlike its North American cousin, this shellfish has no claws. Most of the meat is in the tail. Lobster tail is served split and grilled with melted garlic butter or the meat is mixed into rice or soup.
Conch in Butter Sauce: Meat from this marine mollusk can be tough. But, sliced thin and pressure cooked, its melt-in-your-mouth tender and a real treat when served swimming in a rich butter sauce chock-full of sliced onions.
Kallaloo: Spinach, okra and local native greens are the base for this thick soupy stew. Conch, crab, fish, salt beef or smoked pig tail added for extra gusto. Customarily this dish is served with a heaping helping of fungi.
Goat Water: Goat meat is this thick brown stew’s main ingredient. It’s a rib-sticking robust-tasting dish that is often enjoyed as a breakfast food.
Dumb Bread: This rich round loaf is dubbed for the very clever way in which it’s made. The white flour dough, often sweetened with shredded coconut, is placed into a skillet and set over hot coals. More hot coals are placed over the skillet’s lid to cook the bread from above and below until it’s toasty brown. Dumb bread is usually cut in pie-shaped wedges, split in the middle and filled with cheddar cheese.
Whelks & Rice: A real delicacy, these large marine snails are sizzled in garlic butter and folded into fluffy white rice.
Johnny Cakes: These hand-sized rounds of fried bread are sold by themselves as a snack or with a fried chicken leg for a light lunch.
Roti: The real definition of roti is a tortilla-type flat bread. However, most folks offering roti sell it as a complete sandwich where the thin bread is wrapped around a curried meat, seafood or vegetable filling.
Bullfoot Soup: This soupy stew is made with, you guessed it, bull’s feet. A medley of vegetables like peas and carrots as well as ‘provisions’, which are root vegetables such as yams, sweet potatoes and white potatoes, float in a spicy rich broth along with the meaty feet.
Fish & Fungi: Firm-fleshed fish such as red snapper or Old Wife, is boiled or pan-fried and served whole (locals says the eyes are the best part) in a Creole sauce flecked with savory green herbs. The fish sides up to a mix of cornmeal, water and butter that are cooked and hand-stirred into a side dish the consistency of creamy mashed potatoes. This duo is considered the Virgin Islands’ national dish.